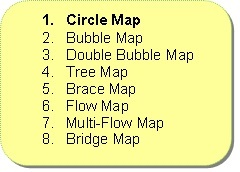 There once was a young woman named Rosita. She was kind-hearted, generous of spirit and very, very smart. She lived in Spain where her father was the oldest and wisest man in their small village.

Now though it was the custom in that time and place for the father to choose whom his daughter should marry. And though young men in the small village came to Rosita’s father asking permission to court her he would turn them away.

This relieved Rosita. Her father knew this. But her father also worried Rosita would not find a husband whose heart and intelligence equaled that of daughter’s.
This troubled her father very much and caused him many, many sleepless nights. At last he thought of a test to determine who would be a suitable suitor for his clever daughter.

“Have you ever heard of a story without an end?”

“I have heard many a story, Father, but I have never heard of a story without an end.”

“Let us have a contest then,” said her father. “The one who can tell an endless story shall be the one to court you.”

“That is a story I would like to hear,” said Rosita.

So her father announced the contest.

Arrangements were made for to be held in the main square of the village. When the day of the contest came, the square was crowded with people. Hundreds of suitors, young and old, rich and poor, had come from near and far to try for the chance to win Rosita’s hand with a story.

One after another the men presented themselves to Rosita each of them thinking he would be the one to tell a story with no end.

Some of their stories lasted for days others weeks. But every one of them eventually came to an end. Some got up to tell a story and were stopped short by jeers from the crowd. Others were drowned out by roars of laughter until they stepped down.

Rosita and her father had nearly given up hope of hearing an endless tale when a man, still dusty from the road, stepped forward. “I have a tale for you, Senorita,” he said looking into Rosita’s eyes.

“Who are you to think you can succeed where a hundred have already failed?” asked Rosita’s father.

He held his gaze as he answered. “I am only Miguel, a wandering storyteller, Senorita. But I have many and many a tale to tell. Perhaps even one without end.”

“Tell it then, Miguel,” Rosita said, “and I will listen.”

The storyteller bowed to Rosita and her father and began.

Long, long ago there lived a king. He was a cruel tyrant and his subjects had to obey his every whim or be put to death. One day the king ordered his subjects to build him a place to store grain. They were forced to toil night and day. Many laborers died like dogs at the foot of the great mud walls and still the work went on. Finally, at the end of the ten hard long years the high walls of the granary stretched up to the sky so far the top could not be seen from the ground. It was finished.

The cruel king ordered his solders to seize all the grain in the country leaving his subjects to starve. It took the kings solders twice the time to fill the granary as it did to build it. From season to season, year to year the soldiers seized the corn from the starving subjects without ceasing.

Then came a terrible drought, when crops withered and cattle died of starvation. The people went to the king and begged him for a bit of the grain he had stolen from them and stored away. But the king had a heart of stone. He refused to help his people.

Seeing all that was happening. The king’s son was determined to help the people of the land. He was by nature the opposite of his father for he was kind hearted, generous of spirit and very, very, smart. He was gifted with the ability to converse with animals. He called out to the leader of the sparrow army. Then the prince told the sparrow leader of a tiny hole high up in the wall. That hole was just big enough to let the tiny sparrows in one at a time. The next day the king’s granary was invaded by the army of sparrows. One at a time birds flew in through the hole and then out again with a grain of corn in its beak. The birds delivered the corn to the hungry villagers and there was nothing the greedy king could do to stop them.”

The crowd of listeners gave a loud cheer as Miguel went on gracefully telling the movement of the birds.

“Flying up, a sparrow took a grain of corn. Flying down and gave it to a hungry villager.”

Now the audience joined in. They all began to chant:
“Flying up, flying down, it took a grain of corn.”

On and on it went.
“Flying up, flying down, it took a grain of corn.”

(Here I ask if anyone in the audience can say this phrase in Spanish. If not I demonstrate how to sign it in ASL. We do this together two more times.)

Finally, Rosita’s father rose and asked Miguel, “How much longer will the birds be going in and out and carrying away grains?”

“O Senor!” smiled Miguel, “the number of birds is countless. They have so far only taken a small portion of the king’s granary.”

Rosita’s father frowned, but Rosita laughed and said, “Father, let us not waste any more time. Clearly Miguel has begun an endless story. We must not let him go on if you would live to see your grandchildren.”

A smile spread across her father’s face. “Miguel! You are a man of great intelligence and a fine storyteller. Who would’ve ever thought there could be an endless story?”

Miguel and Rosita smiled into each other’s shinning dark eyes. Miguel gave up his wandering and courted Rosita.

They were soon married. Over the years Miguel told many, many, stories. But none was so sweet as the never ending story of his love for his lovely Rosita. 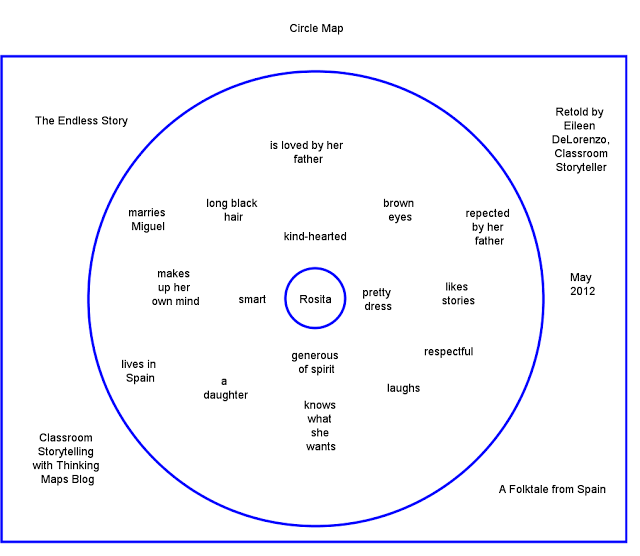 A Frame of Reference is a metacognitive frame that is essential for all Thinking Maps™. Frames of Reference can show: 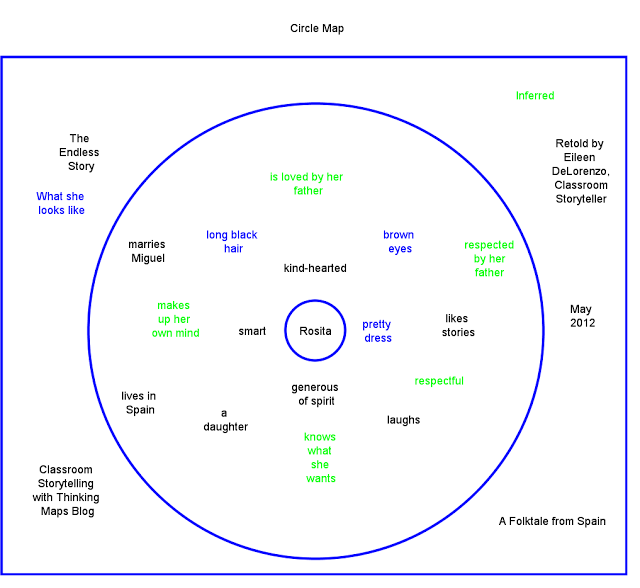